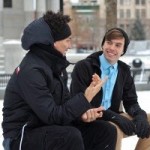 This is the third post in a series about technologies that are shaping the future of communication. We’ve been following technologies that cover an interesting array of possibilities, from enhancing existing communication modes to replacing at least one of the humans in a conversation to assisting people who have a variety of motor, vision, and cognitive impairments. They are all across the adoption curve, from technologies that are already approaching mainstream usage (such as bots and gamification) to a few that are closer to the sci-fi end of things (such as holograms and telepathic communication). Many of these systems rely on artificial intelligence, which is reshaping business communication in some profound ways. All of them present interesting discussion topics for business communication because they get to the heart of matter, which is trying to exchange information and meaning in the most effective and efficient ways possible. To offer students a peek into the future, we've started covering these innovations in our business communication texts, beginning with the 14th Edition of Business Communication Today, which launched in January 2017, and 8th Edition of Business Communication Essentials, which launches in January 2018.

Trying to converse in a language in which you are not fully fluent presents a rather staggering cognitive workload. As a listener, you have to convert the incoming sounds to discrete words and assemble those words into coherent phrases and sentences in order to extract the meaning—and if the other party uses idioms or slang, the task can get exponentially harder. And unlike reading a written document, you have to do all this processing almost instantaneously, without the luxury of going back over something you didn't get. As a speaker, you have to find the right words, assemble them into phrases and sentences using the language’s grammar rules, and then pronounce them all correctly enough so they make sense to the other party. Honing this level of proficiency can take years of study and practice.

Machine translation has been one of the long-standing goals of artificial intelligence, offering hope for real-time communication between people who don’t have a common language. Developers have made impressive strides toward translating speech in near real-time by combining deep learning techniques that apply computational models of human neural networks to massive data sets of languages with advances in natural language processing and natural language generation.

Systems such as Skype Translator and Google Translate are getting remarkably adept. Google’s new Pixel Buds ear buds offer nearly instantaneous translation across dozens of languages (when paired to a Google Pixel phone), making it possible to travel much of the world and converse with anyone who is similarly equipped. A variety of other smartphone and smartwatch apps offer translation without the need for each party to have identical equipment; speakers take turns talking to the device, then listen as it outputs the translated speech. Microsoft’s PowerPoint Presentation Translator adds real-time translation for presenters, making it easier for global professionals to connect with their audiences.

This video from the launch event for Google Pixel Buds shows the devices translating a conversation between English and Swedish. (The translation demonstration starts at 0:48.)

Class activity idea: Ask students to research several apps and other solutions that offer real-time translation. Are they being used successfully in business communication? Do students think these tools will ever eliminate the need to learn other languages in order to communicate effectively with diverse, global audiences?